Most of the time when people ask how I stay organized, I usually refer to my childhood. I am a military brat, my father served in the Army.  We moved around and traveled a lot.

By the time I got to high school, the six of us lived in a small apartment in Darmstadt, Germany. Now, I love my family – – I really do. BUT. But, while some may have thought it was cozy, to me it felt cramped and tight. And then my mother joined the Navy. What!? Crazy.

But really, if I had to narrow down a specific event that affected my relationship with stuff, it would be the fire.

I was living in an apartment, in a not so great side of town, with my boyfriend.  He got a job offer in Chicago and moved there.  I was debating my options and slowly packing my things, when one Sunday morning I awoke to this whooshing sound.  I smelled something funny, ran to the front of the apartment and when I opened the front door I saw the apartment next to mine was on fire.  That fire was blocking the stairs.

At this point, I threw on some clothes, gathered up the dog, looked for the cat, and then just stood there.  I could hear fire trucks in the distance and people yelling but everything faded for just a minute. What about all my stuff?

There was a pounding on the door, I had to go, without my cat and without my stuff.  All of the tenants stood there in the parking lot, dazed and worried about our stuff.  The fire was put out but the damage was done.  Fire or water damage (or both in my case) to every apartment.  And we all had to evacuate quickly.

Walking back into the apartment, I am ashamed to say I was more worried about my stuff than the cat. (She was fine.) During the next two months, while living with my PARENTS, I began thinking of stuff differently.  And began to get rid of it, almost obsessively. Stuff is just that — stuff. It’s not pets or family or something else irreplaceable.

And I got renter’s insurance. 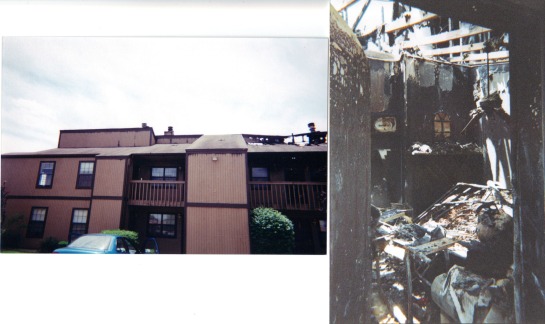 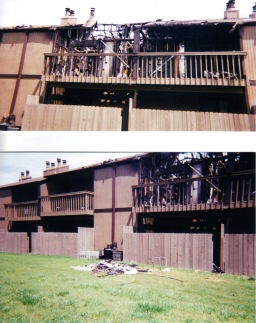