In a new episode of “Jen tries something and fails but learns a valuable lesson,” I tried an exercise called a Life Audit.  Here’s what happened:

As a compliance officer and internal auditor for a bank in my former life, I got excited when I saw the word audit (yes, I know that’s weird, but that’s me).  Naturally, a life audit seemed right up my alley.  I read several articles before I tried it and followed the directions to a tee (ummm, sort of).

Here’s the breakdown: I read “How and Why to do a Life Audit: Architecting a Life in 100 Post-its and a Saturday Afternoon” by Ximena Vengoechea posted on Medium in 2014. The basic premise, (read the article for all the deets) is to set aside one hour, write one wish per post-it note, and in one hour complete 100 post-it notes of wishes.  The article says that no wish is too big or too small, but honestly that in itself is subjective.  For me, all I could think of was big things. What I call “failure” number 1.

So, there I was with my blank post-its, my thoughts, and a blank wall to stick them to (the post-its, not my mind).  Being an organization freak, before I ever wrote one post-it, I came up with general categories for them: Personal, Professional, Health & Well-Being, and Weird & Random. Turns out I am weird and random, so eventually I changed that one to community and moved everything else to personal. 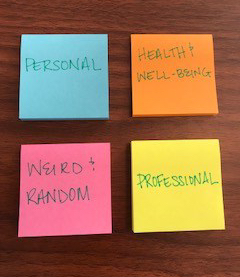 Categories set, I got on a roll for the first five or so – learn Spanish, exercise more (or at all), write a book, be debt free, and save more animals. Then anotherten or so post-its went up including speak at a large conference, get a cat tattoo, and be more patient.  Once I had about twenty post-its on the wall, I began to rearrange them in categories.  Then I saw that some things I wanted would happen if I did others first, so I put them in order.  And then some fit in two categories… you know what happened right?  I got twenty-nine post-its on the wall in an hour and half.  29.

I looked at some other articles written by people who completed this process to see if they mentioned what their wishes were and found that some did, but those didn’t really apply to me (such as getting promoted, getting married, etc).  I looked down in my paper recycle bin and remembered that I had thrown out a few wishes because I only wrote them down because I thought I was supposed to wish for those things. One said “make lots of money” (I’d rather be happy and useful than rich), “buy a house” (I’ve done that before and home ownership is not for me), and “to be seen as an expert in my field.”  Why? I hate the term expert.  To me, it implies I know it all, and while I can be a know-it-all, I will never know it all, you know?  I also noticed that none of my wishes were small. They were big, with lots of work needed to achieve them.

I wondered if I had done the exercise wrong by thinking too much, so I tried again. This time I just had a notebook in which to write the wishes. That way the post-it notes couldn’t get in my way.  I also set a timer for one hour, added in a glass of wine and put on the movie “To Wong Fu, Thanks for Everything! Julie Newmar” because if that’s not a movie about wishes then I don’t know what it is.

An amazing thing happened.  I came up with new things that I was wishing for, like being more spontaneous and riding my bike more. When the timer went off after an hour, I had a whopping … 20. Even less than the first time I tried the exercise! What was wrong with me?

Nothing. At. All. I don’t want for a lot of things; I’m very lucky.  I don’t have many wishes because when I do think about something that I want, I move toward getting that thing. And I don’t want the traditional things because I am not a traditional person (understatement of the year).

So, what do I think about the process?  It can be enlightening.  It can be useful. It can be frustrating. Go. Do it.